In this blogpost, I’ll give an overview of our new paper An algorithm for efficient detection of $(N,N)$-splittings and its application to the isogeny problem in dimension 2 (link), with associated code available here. This is joint work with Craig Costello and Sam Frengley.

In this paper, we revisit the general superspecial isogeny problem in dimension 2, which asks an adversary to find an isogeny \(\phi: \text{Jac}(C) \rightarrow \text{Jac}(C'),\) where $C$ and $C’$ are genus $2$ curves with superspecial Jacobians. The best known algorithm for solving this problem is due to Costello and Smith [5]. The general superspecial isogeny problem underlies the security of various isogeny-based protocols in two dimensions, such as the dimension 2 analogue of the CGL hash function [3], which was proposed by Takashima [16] and later extended by Castryck, Decru and Smith [2]. As we are studying the general problem, we do not assume any knowledge of the degree of the isogeny or any (SIDH-like) torsion point information. Indeed, the superspecial isogeny problem with torsion point information can be solved in polynomial time [11], thus making primitives such as the dimension 2 analogue of SIDH, G2SIDH [8], insecure.

Some background on dimension 2 abelian varieties

In isogeny-based cryptography, we usually consider supersingular elliptic curves. Supersingularity has a variety of equivalent definitions. Two of these are:

There are two types of abelian surfaces:

For dimension 1 isogeny-based cryptography, we usually only consider the elliptic curves up to $\bar{\mathbb{F}}$$p$-isomorphism and label these classes with the $j$-invariant. The same is true for dimension 2 isogeny-based cryptography. In this case, we label the $\bar{\mathbb{F}}$$p$-isomorphism classes with the following invariants:

The Igusa-Clebsch invariants live in weighted projective space, and the subscript denotes the weight of the invariant.

For superspecial abelian surfaces, these invariants lie in $\mathbb{F}$$p$$2$. Recall that the same holds for supersingular elliptic curves; one of reasons confirming that superspeciality is the correct generalisation.

For isogeny-based cryptography, we not only need elliptic curves, but also isogenies. In particular, we consider $N$-isogenies $\phi: E \rightarrow E’$ with kernel $\mathbb{Z}/N\mathbb{Z}$, generated by a point $P \in E(\bar{\mathbb{F}}$$p$$)[N]$.

Moving to dimension 2, we consider $(N,N)$-isogenies.

Definition. An $(N,N)$-isogeny is an isogeny (i.e., a surjective group homomorphism with finite kernel) $\phi: A \rightarrow A’$ between abelian surfaces $A$ and $A’$, where:

The second condition is there to ensure that $A’$ comes equipped with a principal polarisation. For $N$-isogenies, this is always satisfied, and therefore this condition is usually omitted from the definition.

The general isogeny problem can be viewed as finding a path between two nodes in the superspecial isogeny graph.

Definition. The superspecial isogeny graph, denoted $\Gamma(N; p)$, is the graph with vertex set $\mathcal{S}(p)$, defined as the set of isomorphism classes of superspecial abelian surfaces, and whose edges are $(N,N)$-isogenies over $\bar{\mathbb{F}}$$p$.

This graph has a number of nice properties:

The hardness of the general isogeny problem in dimension one is largely based on the fact that the supersingular isogeny graph is Ramanujan, i.e., has optimal expansion. In contrast, $\Gamma(N; p)$ is not quite Ramanujan, but we can still argue that the expansion is good enough to build secure cryptographic protocols [7].

As we have two types of abelian surfaces, there is a natural partition of the vertex set. Indeed, $\mathcal{S}(p)$ is equal to the disjoint union of:

We often fix the vertex set but consider multiple edge sets. We will therefore use $\Gamma(\mathcal{N}; p)$ to denote the graph with the vertex set $\mathcal{S}(p)$ and and whose edges are $(N,N)$-isogenies for all $N\in \mathcal{N}$.

Attacking the isogeny problem in dimension 2

The best known algorithm for solving the general isogeny problem is due to Costello-Smith [5].

The Costello-Smith algorithm proceeds as follows. Suppose we are given a start node $A$ and end node $A’$ in $\mathcal{J}(p)$. Our goal is to find an isogeny $\phi: A \rightarrow A’$. 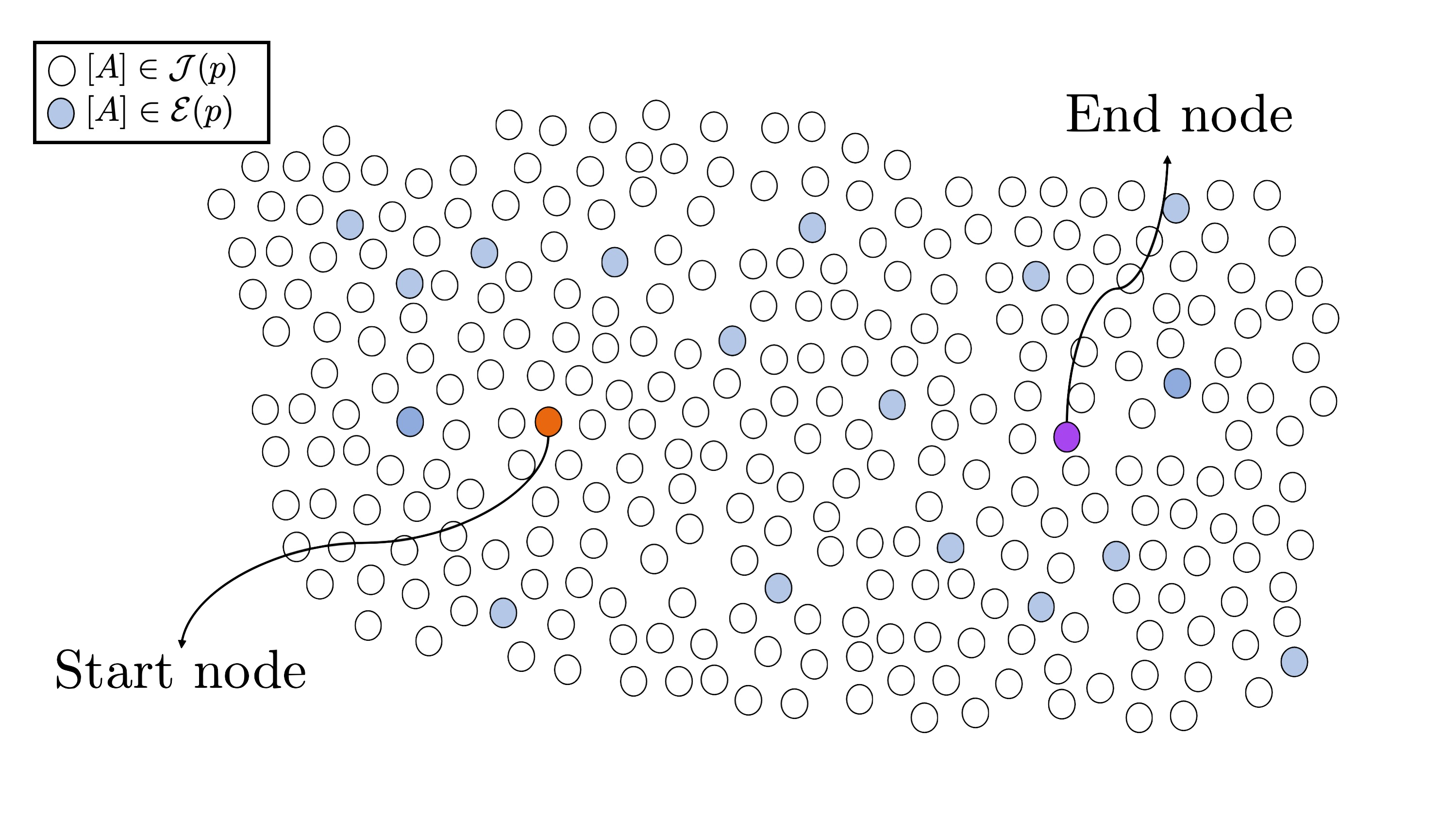 Step 1: find a path to the special subset 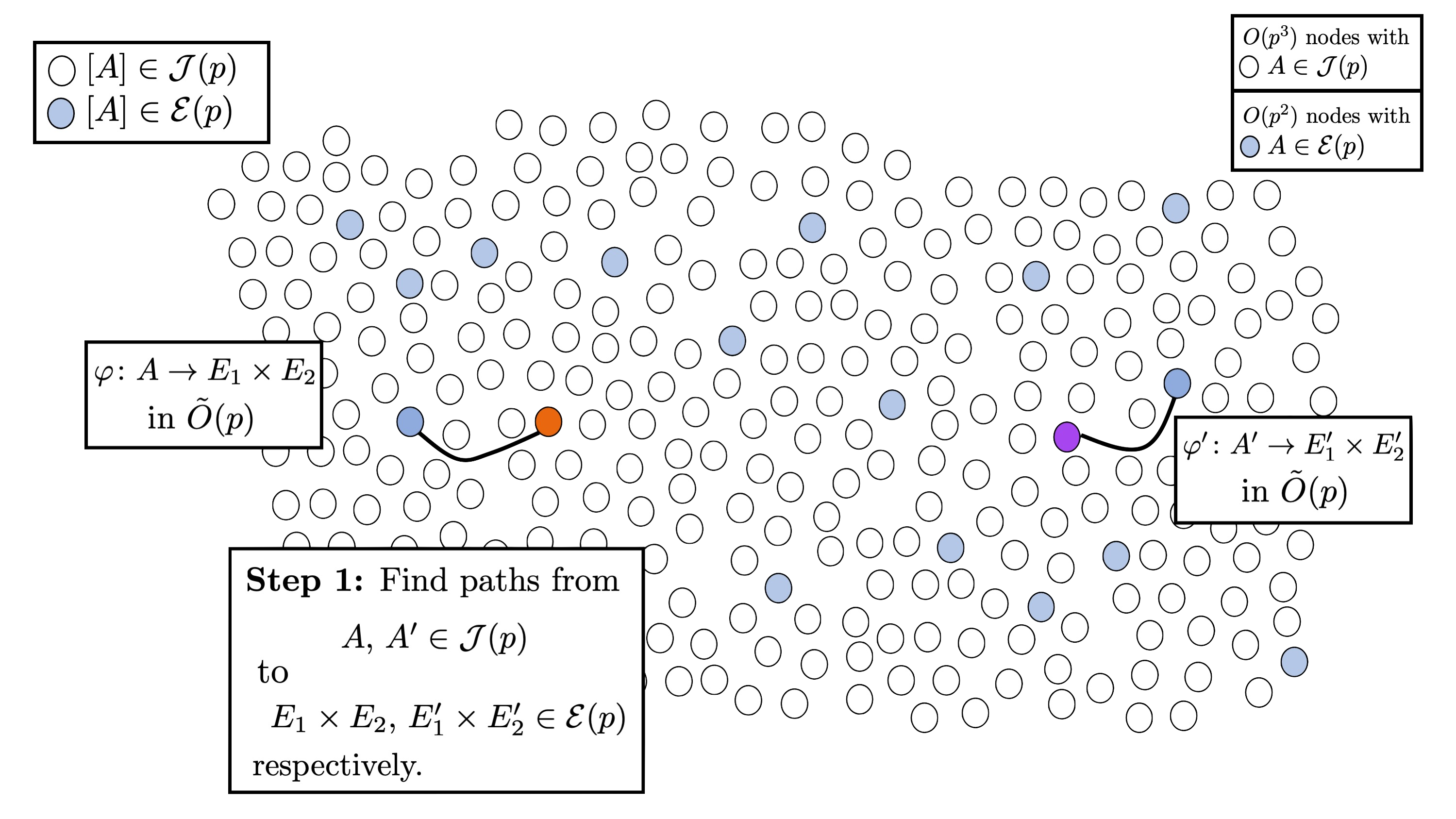 Step 2: solve the problem in the special subset

Therefore, this step is expected to run in $\tilde{O}(\sqrt{p})$, as it is dominated by one run of the Delfs–Galbraith algorithm. 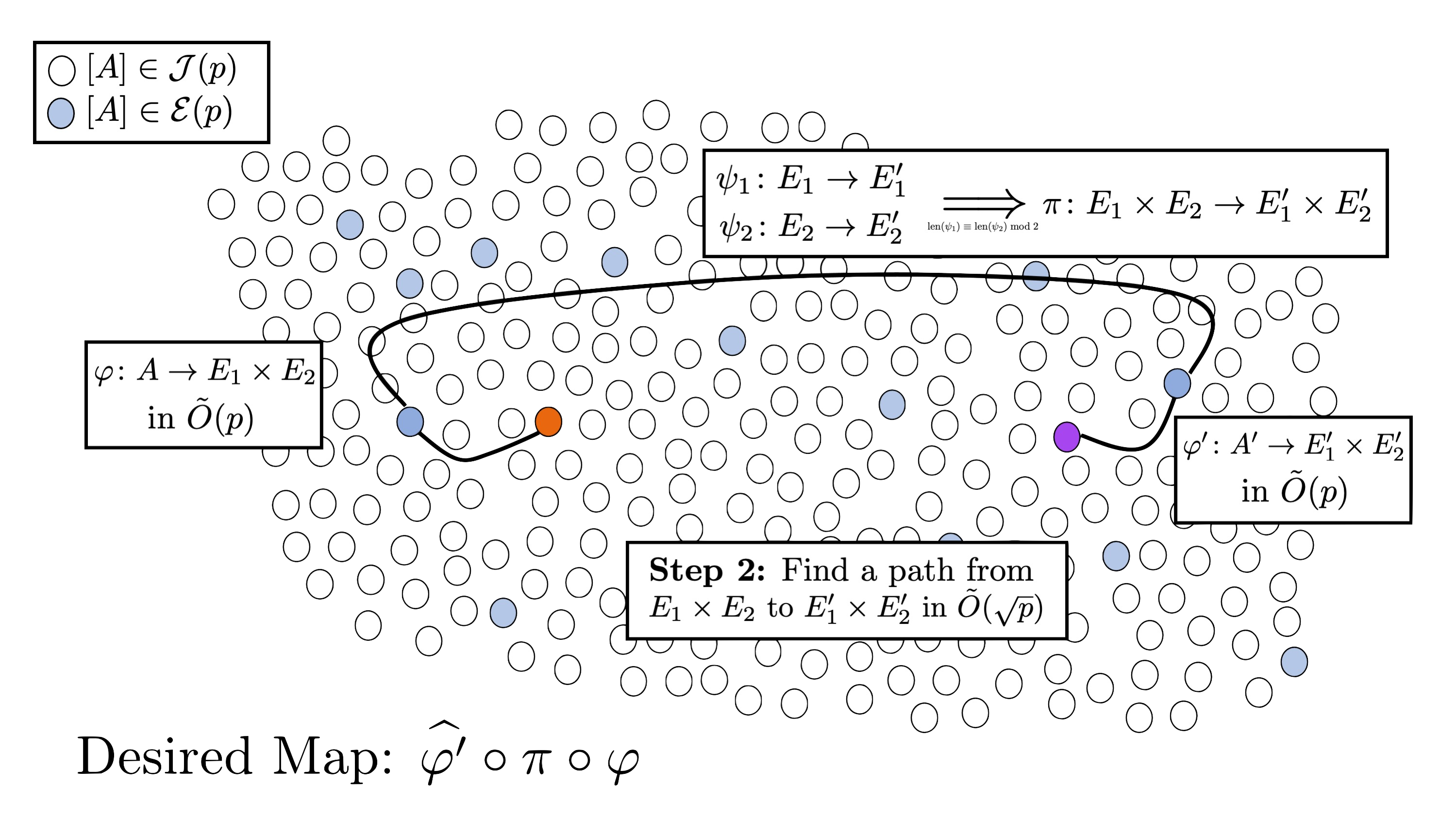 Overall, the cost of the algorithm is $\widetilde{O}(p)$ bit operations, and is dominated by step 1.

Can we improve the efficiency of the bottleneck step?

The bottleneck of the attack is the first step, which can be rephrased as: walking in $\Gamma(N; p)$ until finding $A \in \mathcal{J}(p)$ which is $(N,N)$-split.

For this reason, we focus on this step.

Let’s look in more depth at this first step in the Costello-Smith algorithm:

In summary, they use Richelot isogenies (as these are the most efficient to compute) to take walks in $\Gamma(2; p)$ and detect $(2,2)$-splittings. One of the motivations of this paper was the answer the question: by taking steps in $\Gamma(2; p)$, can we detect whether the current node $A$$i$ is $(N,N)$-split for $N>2$?

A (naive) answer to this question would be to compute all $(N,N)$-isogenies from $A$$i$, but this is not efficient (as it requires, at a minimum, the computation of three $N$-th roots). Can we make the detection efficient? We answer this question in the affirmative for $N \leq 11$, and apply this to improve the concrete complexity of the Costello-Smith attack.

Efficient algorithm for detection of $(N,N)$-splittings

This question is answered by moduli spaces. Informally speaking, a moduli space is a geometric object that parametrises algebraic objects. 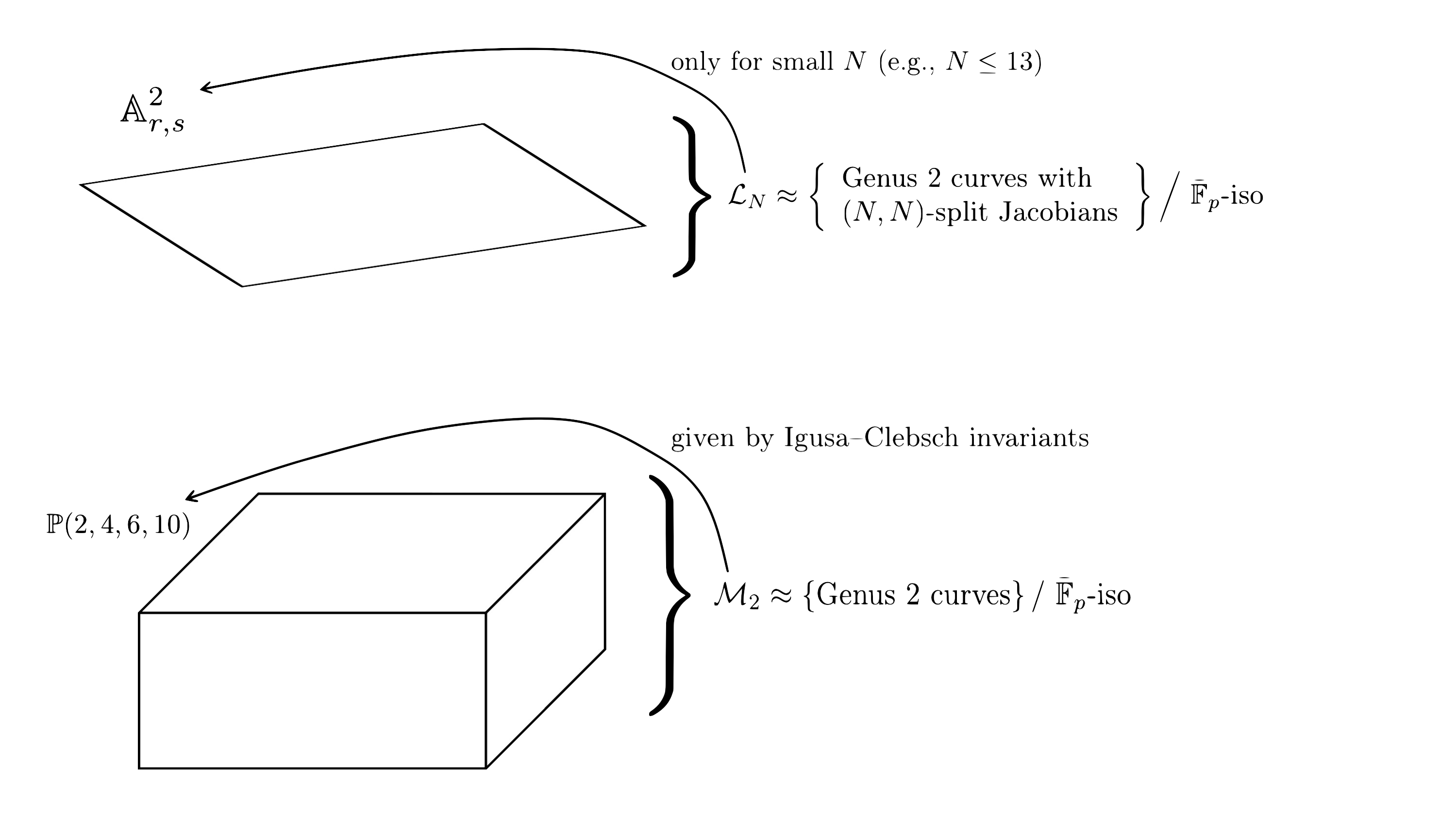 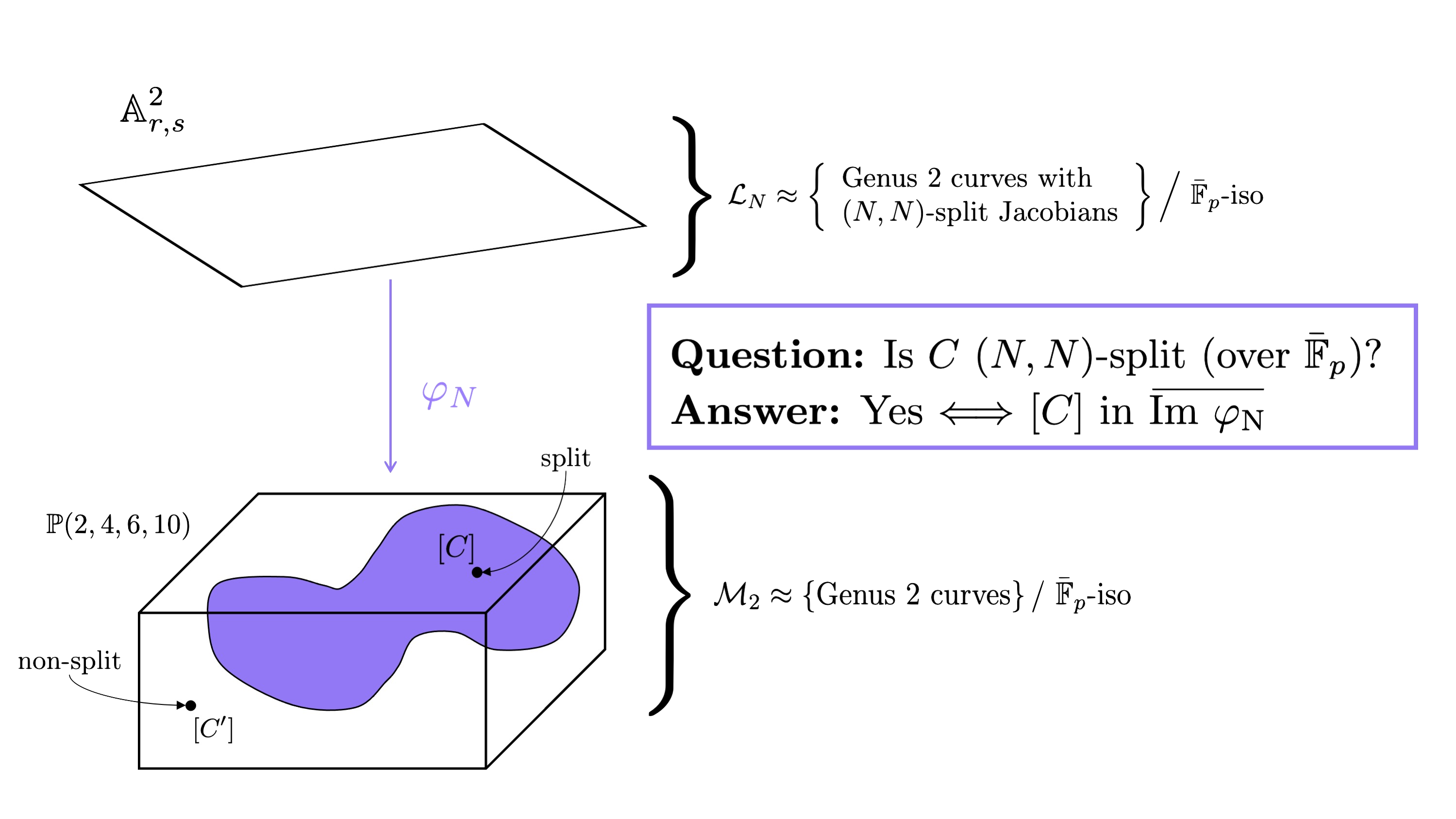 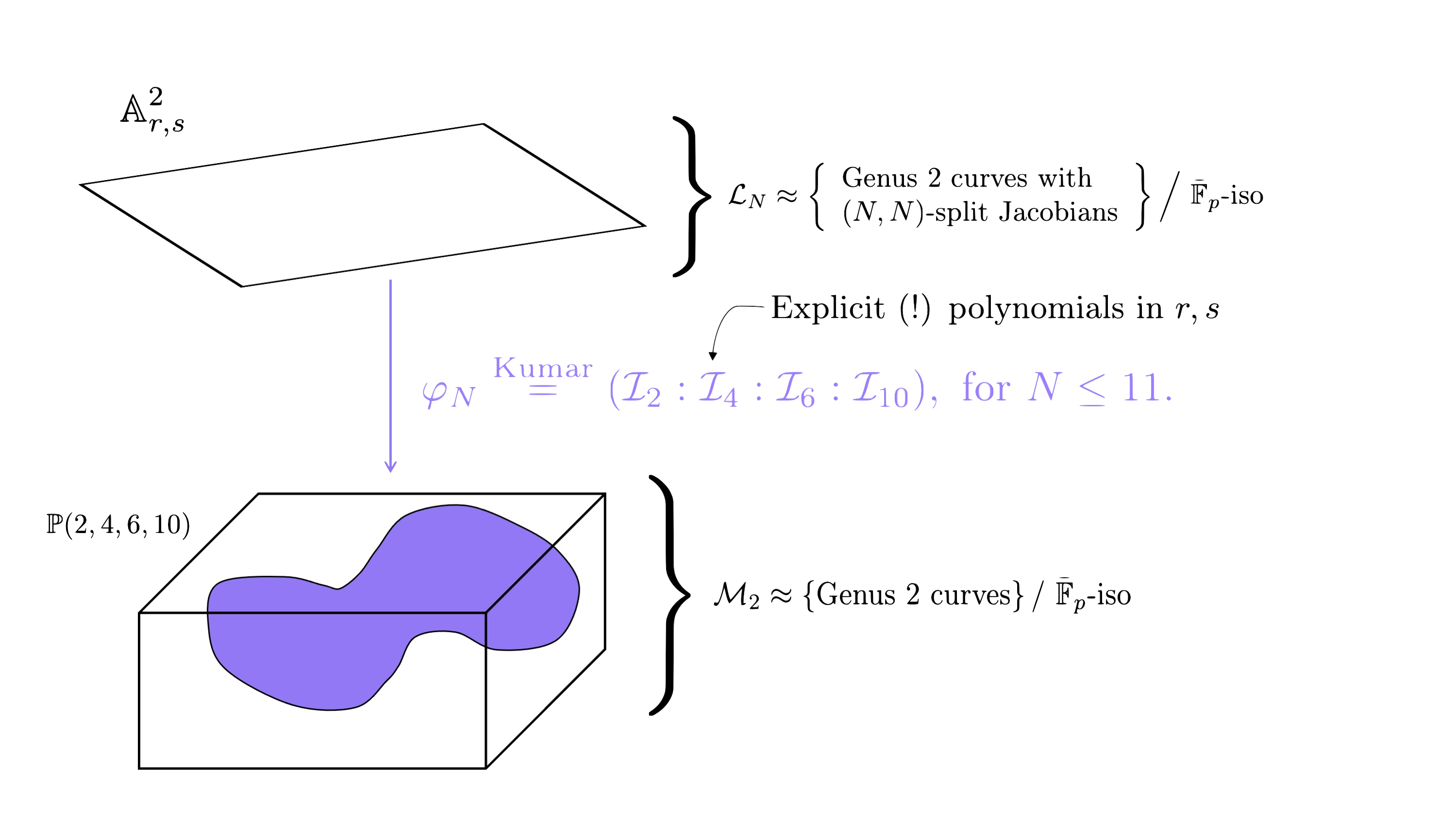 Not only this, but if we find such an $r$$0$ and $s$$0$ for some $N$, Kumar gives us maps that recover the elliptic curves such that there exists an $(N,N)$-isogeny $\text{Jac}(C) \rightarrow E \times E’$. Unfortunately, we don’t recover the actual isogeny, only that one exists. However, we can compute the isogeny as a post-computation using the AVIsogenies package (e.g., by computing all $(N,N)$-isogenies from $\text{Jac}(C)$, as we now know that one will land in a product).

As a result, we instead use elimination theory and compute resultants.

As the $f$$i$ are rational maps, we also need to ensure that the solution does not make the denominators of the $f$$i$ vanish.

In fact, we actually use a more efficient method where we precompute the resultants generically, and then compute the gcd for each instance $C$.

We now discuss how efficient splitting detection can be applied to attacking the dimension 2 isogeny problem. In our paper, we construct a new algorithm SplitSeacher, which applies split detection to the first step of the Costello-Smith algorithm.

Precomputation. First we determine a set of optimal $N$’s for which we detect $(N,N)$-splittings. We do this by finding $2 \leq N \leq 11$ that minimise the following ratio \(\frac{\text{number of } \mathbb{F}_p \text{ multiplications}}{\text{number of nodes revealed and inspected}}.\) The numerator is simply the cost of taking a step in the $(2,2)$-isogeny graph plus the cost of splitting detection for $N$ in the optimal set. The denominator is trickier to compute. The number of nodes revealed by taking a step is simply 1. If $N$ is odd, then the number of nodes inspected at each step using split detection is the number of neighbours in $\Gamma(N;p)$, namely $D$$N$. However, if $N$ is even, as we are walking in the $(2,2)$-isogeny graph, the number of nodes inspected at each step by split detection is less than $D$$N$. We determine the precise number in Lemma 4 of our paper.

Step 1. We first take a step in $\Gamma(2; p)$ using Richelot isogenies. If we have walking onto a product of elliptic curves, then we terminate. 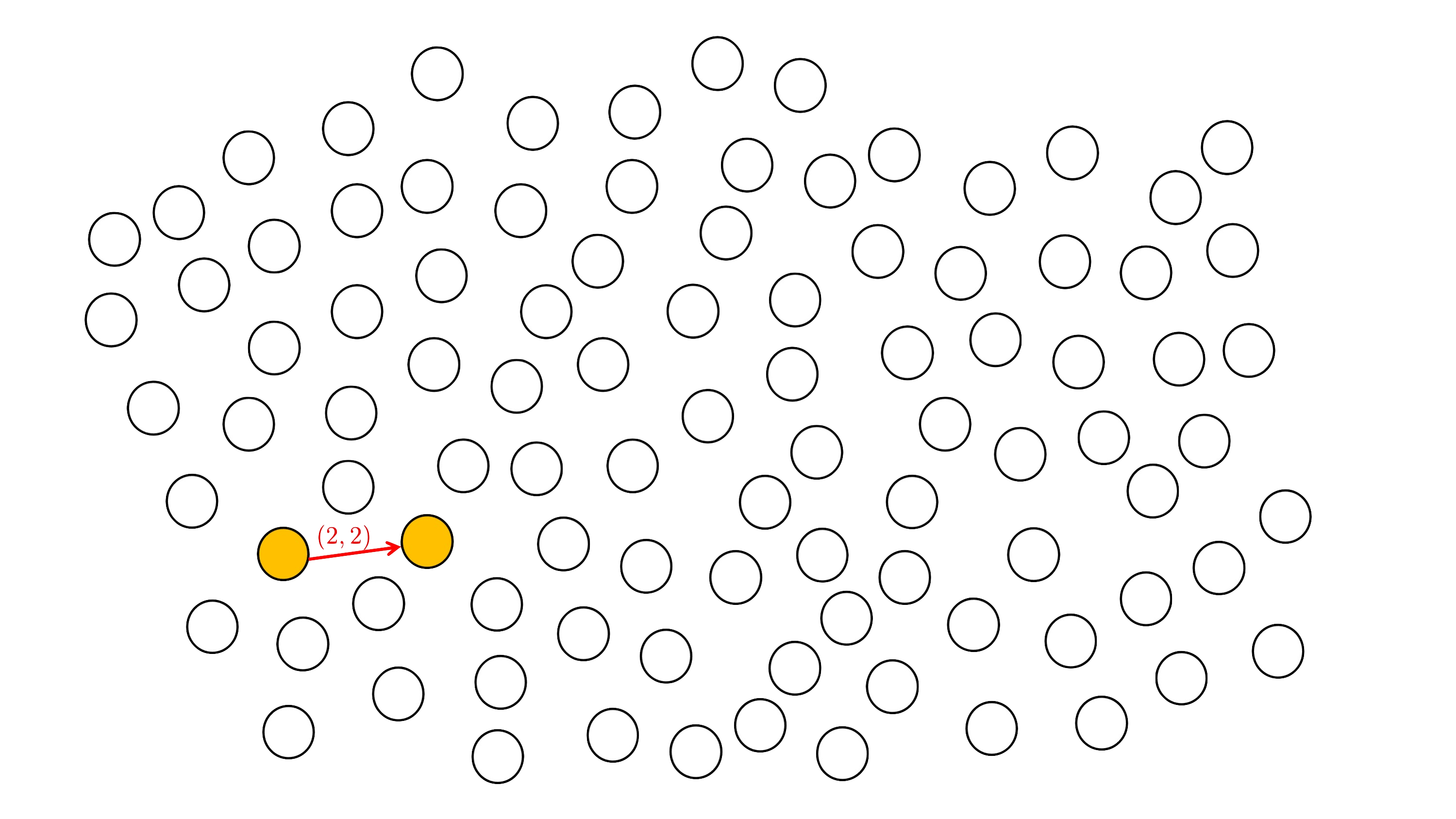 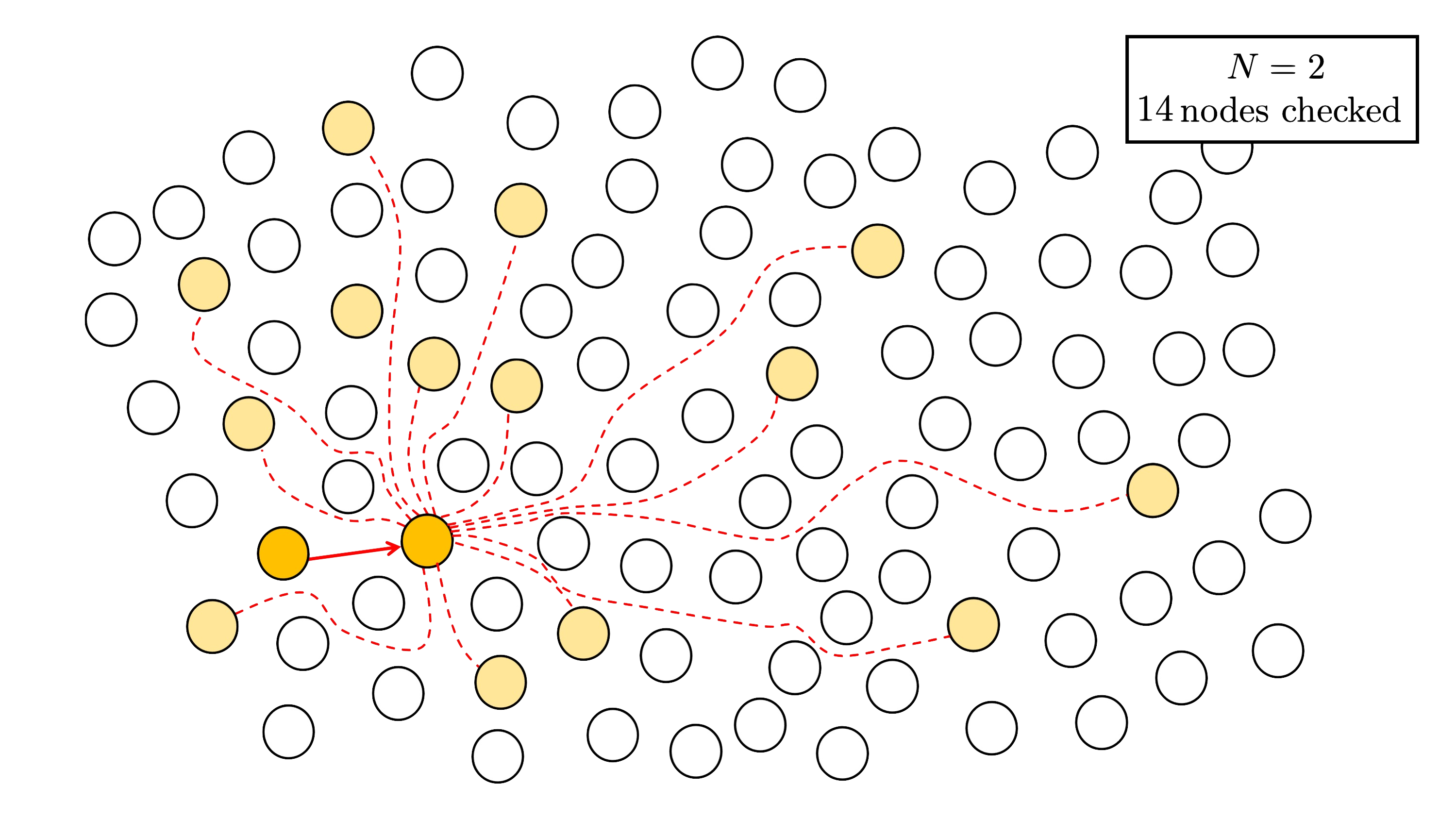 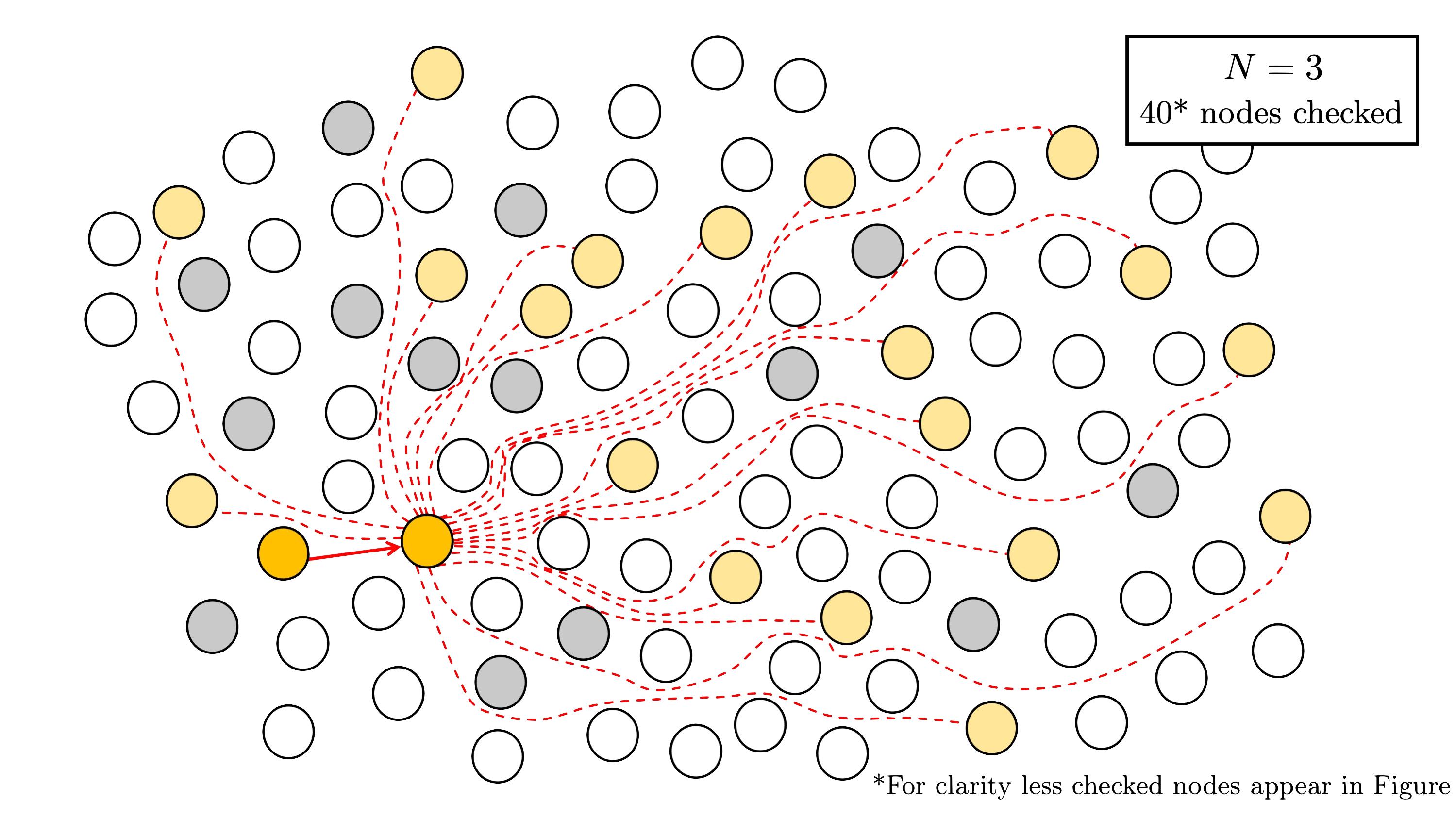 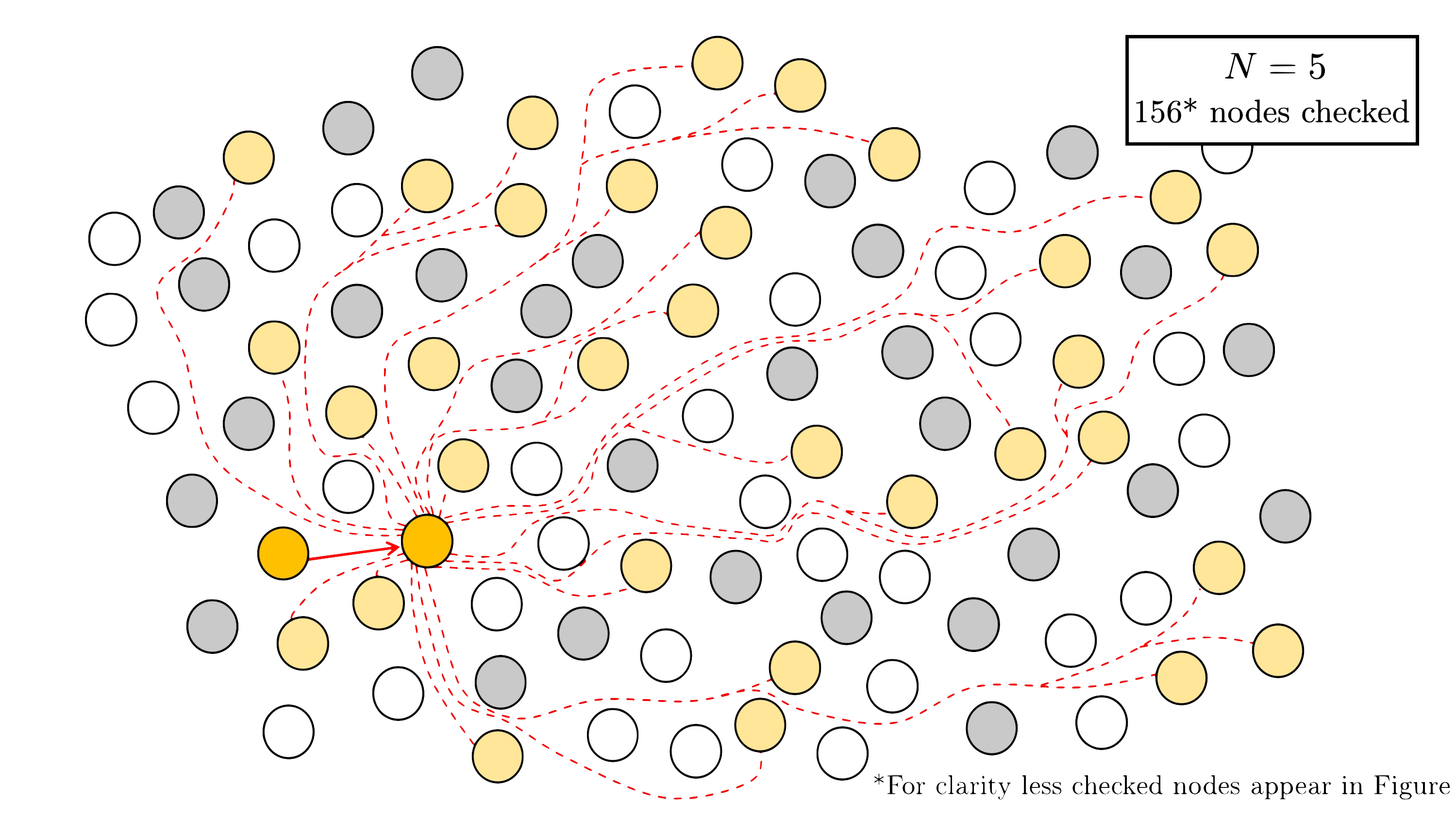 If at any point we detect a splitting, terminate.

At a high level, SplitSeacher can be viewed as an analogue of SuperSolver [4] (joint work with Craig Costello and Jia Shi), which improves on the concrete complexity of the Delfs-Galbraith attack against the dimension 1 isogeny problem. Both attacks use random walks to find special nodes in the graph to reduce the algorithm to a comparitevely easier isogeny problem: the special nodes in the Delfs-Galbraith algorithm are the isomorphism classes of elliptic curves defined over $\mathbb{F}$$p$, while the special nodes in the Costello-Smith algorithm are the isomorphism classes of abelian surfaces that are isomorphic to products of elliptic curves. The improvements in SuperSolver came from an efficient method for determining whether modular polynomials have subfield roots without computing any such roots explicitly. Here, our improvements come from Kumar’s parametrisations of the moduli space of dimension $2$ abelian surfaces whose Jacobians are split by an $(N,N)$-isogeny. To hear more this general framework for attacking the general isogeny problem (in dimensions 1 and 2), check out the talk I gave at the Isogeny Club.

We implemented and optimised the first step of the Costello-Smith attack with and without detection of $(N,N)$-splittings. We performed experiments for primes $p$ of bitsize $50-1000$, running the first step until reaching $10$$8$ multiplications. We counted the number of nodes revealed and $\mathbb{F}$$p$ multiplications per node revealed.

Relatively speaking, the improvements we obtained using SplitSeacher are significantly bigger than the improvements by SuperSolver to the concrete complexity of the Delfs-Galbraith algorithm. Though our detection of $(N,N)$-splittings requires more computation that the analogous $N$-isogenous subfield curve searching in SuperSolver, in dimension 2 we reveal $O(N^3)$ neighbours simultaneously, compared to $O(N)$ in the dimension 1 search.

[7] E. Florit and B. Smith. Automorphisms and isogeny graphs of abelian varieties, with applications to the superspecial Richelot isogeny graph. In Arithmetic, Geometry, Cryptography, and Coding Theory 2021, 2021.

[9] A. Kumar. Hilbert modular surfaces for square discriminants and elliptic subfields of genus 2 function fields. Research in the Mathematical Sciences, 2(1):1-46, 2015.